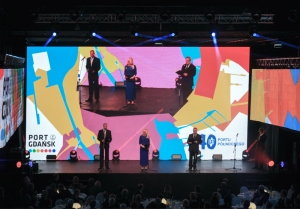 On 10.16.2014 r. our Agency had the honor to organize celebration of 40th anniversary of the Gdańsk Nortern Port. The event was held in the unique setting of the newly-launched Gdansk Shakespeare Theatre. The artistic highlight of the gala evening was the performance of the "Ocelot" Acrobatic Theatre from Legnica. The show entitled "The Heart of the Port" had been especially prepared to mark the anniversary of the Northern Port and featured breathtaking acrobatic actions performed right below the ceiling of the theatre hall. The combination of scenery created by our Agency (see the design and visualization), the charm of the theater and the fantastic performance of Ocelot Acribatic Theatre made the this event a huge success. The meeting was attended by nearly 300 people, including current and former employees and other people associated with the Port since its launching.