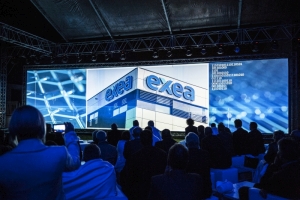 On September 19th, 2013 we organized the opening of a modern data center EXEA, which is the heart of the recently constructed facility - Innovation Centre at Torun Technology Park. The event was attended by government representatives , entrepreneurs from the IT industry and journalists. The meeting was divided into three parts - the essential part consisting of expert lectures, opening gala of the facility in the form of a multimedia presentation on the facade of the building and on the wide screen, and a networking combined with a banquet. The main goal of the conference was to promote the brand, the product and offer of Exea Data Center. Our multimedia and content ideas familiarized the term and the meaning of "Cloud Computing" and made the whole event was very impressive. Designed for the occasion, multimedia projections were displayed in the technique of irregularities simulation on flat polygons in three-dimensional graphics using modern projectors, illumination effects, surround sound, and stereoscopic graphics.