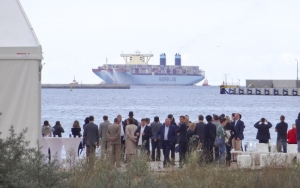 On 21-24.08.2013 we had the undoubted pleasure to organize a series of events associated with entry of the world's largest ship -Container Triple-E to Gdansk . We coordinated the event for Maersk and Deepwater Container Terminal. The first day two events took place in the same time-a viewpoint with telescopes and many attractions on the beach in Gdansk Stogi where you could observe spectacular entru of container ship to the port, and the official event inaugurating the maiden voyage of the Triple-E, which took place on the beach in the DTC. In the inauguration event the participiants were the most important representatives of companies and institutions related to maritime transport. The next day of the event, 22.08 we organized a press conference for journalists, and coordinated the event associated with visiting the Container Vessel by specially invited VIP guests. 23.08 on the Fish Market in Gdańsk we organized the town of Maersk, which provided a large number of attractions, such as mobile cinema, face painting for children, a tent of Maersk. Guests could also win numerous awards including a cruise to the Northern Port, where the world's largest ship- Triple-e could be seen from the waterside. In the evening of the same day, our agency dealt with the coordination of the integration evening for Maersk, which took place in Brovarnia restaurant at the Hotel Gdańsk. The next day, after arranging teambuilding training for Maersk employees, we had the pleasure to create for them an unforgettable White Party style evening , which was the culmination of the series of events related to the arrival of the world's largest Triple-E vessel to Gdansk. We invited guests to this prestigious event using our electronic system of guest registration.